Teaching as an Inquiry Framework

We have now reached the halfway mark of the school year, and as part of our first CoL meeting of Term 3 we were asked to spend some time reflecting on where we are with our on Teaching as Inquiry Framework.  The graphic below was provided for us to fill out as we collected our thoughts before meeting with our CoL Achievement Challenge groups. 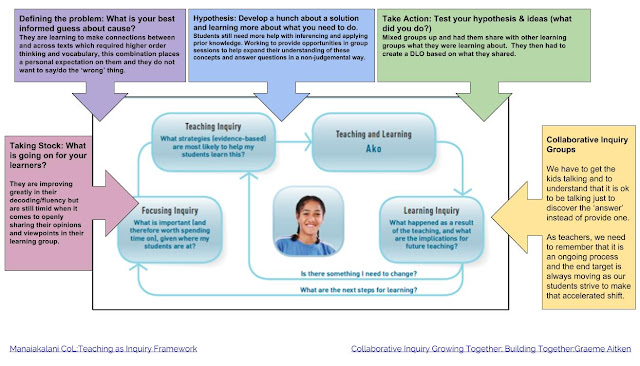 By sharing our hunches, successes and failures with our colleagues from across the CoL we are given an unique opportunity to learn from and be encouraged by others who are striving to achieve a common goal within their own classrooms.
Posted by Mrs. Moala at 10:04 pm No comments:

As part of our Term 2 Spark MIT Inquiry, we were tasked with spending some time reviewing and making connections to the Inquiries of previous Spark MIT Teacher Inquiries.

After reviewing the Spark-MIT website and looking at various participant's focus questions, I spent some time watching the final presentations of a few prior participants.  It is so interesting to look back at these presentations and see how teaching has changed (and student achievement has increased) across Manaiakalani over the years, sometimes as a result of the findings of these inquiries.

One Inquiry in particular had me directly thinking of my personal inquiry and the things I have implemented in my classroom this year.  I spent some time looking into this inquiry when I was formulating my own plan of attack for working with the Year 4 students this year.  It has been so beneficial to look back once again and reflect on some aspects of Kent's inquiry and how I have been able to implement some of those same ideas with a much younger cohort of students.

Kent Somerville: How do you hook and cognitively engage students to read a range of texts?

At the end of Term 2, I spent some time reflecting on the achievement levels of my inquiry focus group and I am very pleased with the continued progress that these students are making.  These results are based on Running Records done using the Blue PM testing kit.  However, it is important to note that I did not test the students already reading at L29 at this time for various reasons.

After further reflecting on my end of Term 1 goals with Rewindable Learning and Create Tasks and then all the PD we received from Jo Knox in regards to accurate OTJ, I placed more of an emphasis this term on practical things that we know work to boost maths confidence and tried to provide different group settings for my students to fully understand the concept of addition.

At the beginning of this year, the majority of my maths class were working at or below Stage 4, and many of those at Stage 4 had gaps in their understanding, which hindered their personal confidence. So, I decided that I was going to begin each day with X-tra Maths set only on the basic Addition facts setting.  For the most part (once the initial fun of a new program on their Chromebook wore off), the class was not overly excited about having to go through their addition facts each day.  However, I spent some time with each micro group early this term reviewing ways to add numbers together without using out fingers or holding the bigger number in our head.  We used counters and 10-frames, number lines, doubles and tidy tens...over and over and over.

One thing I did differently this term, was that I broke my micro groups up even smaller 1-2 times a week and met with fluid groups of 3 from across the class based primarily on their previous levels of understanding still focusing only on addition.  We began with adding 2-digit numbers using our whiteboards at the bean teaching table.  As we added, we reviewed place value and continually discussed the number of 10s in a number as we broke numbers up to add them together using 10s and 1s.  As students were able to add 2 digits, I mixed groups up again and moved some onto over the 10, followed by adding 3-digit numbers using HTO's and then some over the 10 as well.

It is important to note, that X-tra Maths was still happening, but something was changing.  The complaining stopped, and they were simply walking in from Morning Tea, sitting down and getting on with it.  Some were even going through the program twice, without being asked, in an effort to increase their score.

I also wanted to be sure to place an empahsis on Strand more directly than in the past, so I began having a whole class lesson each Monday to set up the topic, which generally consisted of an online game or interactive site for the class to use prior to completing their learning tasks.  This was great because it provided something different and fun for the class to work on while they waited to meet with their learning group during the week.  It was also interesting to see that since our strand this term was primarily Geometry based, my students took to it very easily and have been having a lot of fun working through the given tasks.

Students also continued using MathsWhizz this term, which allowed guided instruction with immediate feedback for both the students and for me.  I often use the Topic Focus setting once a week in an attempt to further student understanding on specific topics of need or to reinforce topics that we are directly working on in class.

Is it working?  Definitely! Slowly at times, but we are getting there.  After testing for my Term 2 reports, I realised that I only have 4 students still working below Stage 4.  One student who was in that Stage 1-3 group at the beginning of the year answered his basic addition GLOSS question with quick ease and his reason was simply, "I just knew it because of xtra maths!"  That same boy was new to our school at the beginning of the year, and out of curiousity I asked him if he was nervous when I tested him in February.  He looked at me kind of weird, and I explained further that I was wondering if he made silly mistakes back then because he has improved so much.  He slowly smiled before confidently saying, "Naw...I've just learnt heaps this year!"
Posted by Mrs. Moala at 5:27 pm 1 comment: