This year's Burst and Bubbles was a lot of fun. It was great to hear what everyone was doing and how the classroom pedagogy had changed due to the Covid restrictions we faced during the year. Please read my Burst and Bubbles report below or click here to see the video of my presentation. 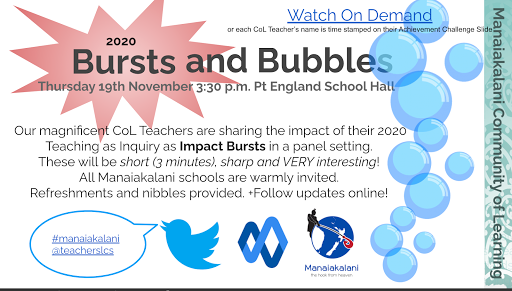 The catalytic aspect of student learning my inquiry focused on this year was  providing opportunities for mathematical vocabulary acquisition to strengthen a student’s self-efficacy in maths.

I identified this as my focus when I noticed that many of my students were beginning to happily have dialogic conversations in literacy but were finding it difficult to carry that same level of conversation across to maths. Also, during my create based learning tasks students were asked to create videos of themselves discussing their thought process behind their problem solving strategies. Very quickly it became apparent that many students were unable to use the correct mathematical vocabulary when describing their solutions.

To build a rich picture of my students’ learning I used PAT, strand based Easttle and GLOSS test results, personal observations/reflections, student voice surveys, and video recorded maths lessons and student interactions throughout the year.

The main patterns of student learning I identified in the profiling phase were that many of my students didn’t necessarily find maths difficult but they voiced that multiple step problems and the understanding of mathematical vocabulary were difficult. I soon realised that many of my low achieving students actually were able to complete the mathematical processes within an isolated step, but once the whole problem was put together or they were presented with an unknown mathematical term they shut off.

My profiling of my own teaching showed that I had strengths in promoting a safe space for students to share their mathematical thinking even if that meant making a mistake.  My students indicated that I consistently provided ways for students to hear, understand and use new mathematical terms. But I felt my students would likely make more progress if I developed in my understanding of techniques used to teach mathematical terminology that would allow the opportunity for them to expand their abstract reasoning and move beyond basic operational problem solving.

The changes I made in my teaching were beginning each strand based unit with a “Diving Deeper” task that frontloaded students with definitions and examples of the mathematical terms that they would encounter during the course of the unit. I also began to insist that students used proper mathematical terminology when discussing their thought process. A basic (yet common) example would be saying, “I added 5 and 7” instead of “I plussed them.”

The scholarly research (literature) that helped me decide what changes to make was a combination of scholarly articles, our own Pt England maths PD and discussions with other CoL teachers who shared their learnings from various professional development that they had attended.

The easiest thing for me to change was the way that I was beginning each unit with a deep dive into the mathematical vocabulary for that particular strand.  However, the most difficult thing to change were the ideas I obtained from the scholarly literature that I had read. This was made difficult because of the changes in pedagogy we had to make in response to the various Covid levels and lockdowns.

Overall I would rate the changes in student learning as decent for the type of year we have had.  The evidence for my rating is that 13/21 students who took the PAT test in both Terms 1 and 4 obtained the average yearly progress in their Scale Scores, not surprising is that the students who attended online distance learning and those who returned to school directly after each lockdown made the most progress.